A bit of validation from an odd source

There are folks – some nudging gently, others with reddit downvote rage, and my own mother – who don’t like when my comics deviate from what they think is the intended style.

I play Guild Wars 2 and, like all MMOs, fans complain all the time about niche activities in the game. I just wanted to quote what this developer said about an upcoming hard mode in a game activity:

“I’d never claim to be an amazing designer. Only that I do think carefully about the design choices I make. Any time an artist chooses to do something that will be less popular than an alternate choice they know that they will be called a bad artist by many. Goes with the territory. It’s like (and I’m not comparing myself here) film makers such as David Lynch and Kubrick who make movies/shows with purposefully ambiguous symbology and unsatisfying endings, or musicians like Bjork who will randomly release a virtually a capella album. These decisions limit the audience and make a lot of people who do stumble across their media angry, disappointed, annoyed, etc. And then say “That was bad.” Again, I’m not saying that my work is anywhere in the same league as Bjork or Kubrick. Only that there is a common phenomenon where people who don’t like a particular style, or find something that doesn’t fit in the popular established mold tend to assume that it is therefore ‘bad’.

Hey, maybe my work IS bad. I’m just trying to make stuff that I personally love to play. and it seems like there are others like me. At least enough to keep my quirky little project going!” –Josh Foreman, Environment Design Specialist (Sourced from here)

So I thought I’d post that just to help folks understand that the first fan of Mister G Kids is me, and for me to sit down and draw a comic every day and not get paid for it – well, sometimes things get a little weird, sometimes the comic is bad, and sometimes I suck as an artist!  But if I can’t have fun and entertain myself, I would stop drawing the comics and shut down the site.

But as Josh Foreman said above, there are enough readers who like what I do – whether it’s a typical cute comic about something silly a little kid said at school, or a vampire massacre with teen pregnancy and child labor – for me to justify taking these little side trips of head-shaking oddness.  There is a core group of you who get where I’m coming from.  If you’ve had any exposure to my other comic series, you know that my humor is dark black, so I NEED to let it out sometimes.

Nevertheless, the central purpose of Mister G Kids still is to enjoy telling you what cute and funny things kids say, because while I have a cynical black heart, nothing warms it and makes it grow three times its size than one little kid making me melt with some simple observation about the world. 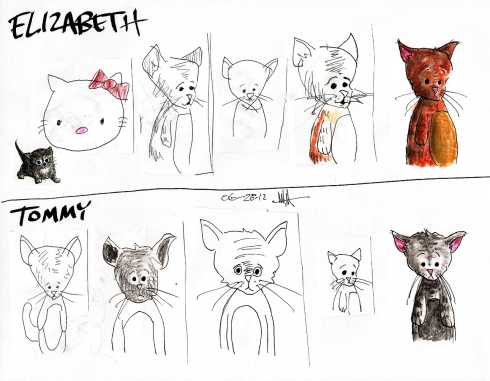