Yesterday I posted this comic in Hebrew.

Today I present the English version.

But that’s not all.

On my way home from school yesterday I was thinking – comic readers take for granted that comic panel sequence will follow the same direction as their written language.

Hebrew is written right-to-left.  I studied it in college about a hundred years ago.  So I dug up my old stuff and pieced together some dialogue based on some real conversations I’ve had with Jewish kids on the West Side of Los Angeles.

And I also drew the cartoon from right-to-left.  If you are some kind of detail freak you would know that I always put the light source on the right side of my comics.  So to make my head explode even more, I also changed the direction the light was coming from to the left.

Finally, as a left-handed person writing in English might admit, being “-handed” against the direction of the text can cause your hand to sit in your ink.  This happened to me.  As a right-handed artist working in English, it’s easy to make passes from left-to-right that don’t smudge my work.  Doing the Hebrew cartoon from right-to-left caused a whole other set of headaches.

So there you have it.  Today I just flipped the image horizontally and dropped in the English translation.

By the way, the title is inspired by the great 17th century John Ford play ‘Tis Pity She’s a Whore.  Yes, someone in the 1630s got away with that title. 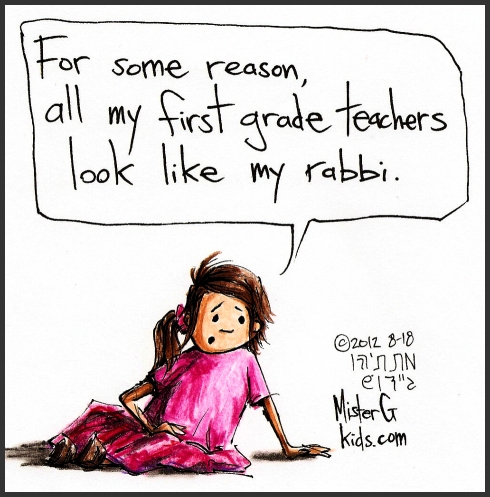 I’m skipping Weekend Kids today to make up for the lost comic this week.