The meek shall inherit the Earth.  But the comics you liked the least will be forgotten forever if I don’t remind you of the time you ignored it, read it and went, “meh,” or simply said, “this comic sucks.”

I have had those moments too.  Every writer and artist knows that if we are on a schedule, there will just be days when we make crap.

Crap, of course, helps make the good comics seem even better, the way that you mostly are kinda okay with Mark Hamill, but when the Emperor is pouring shitloads of lightning bolts into his broken body you really like him for a couple of minutes.

Making crap is also a cleansing experience.  If you’ve made three days of crap, there is a really good chance that what you make on the fourth day will be better.  So making crap is a cathartic way to get through the bad ideas that YOU KNEW in your gut wouldn’t work but were too cocky to put in the “don’t make this into a comic” pile.

(I realize I’m using words like “crap” and “gut” a lot, and there are some great potential connections to your actual gastrointestinal system to be made.  They are all accurate.)

Finally, making crap is a way to train your audience to expect less.  If you can get them underwhelmed over the course of a few days, you can really knock one out of the park with a comic that would otherwise be barely acceptable.

Enjoy the list! Remember, if you choose to click on the comic, or God forbid, “Like” it, you will upset the careful balance of this statistical set.  In other words, these comics are the least liked – if you start liking them, I may have to remove them from this list!

Ok, all kidding aside – I happen to really like some of these comics.  Some of them I bet you have never seen.  And that’s because in the early days I was still learning how to publicize them, so only very few people knew they were here.  But the other reason for unpopularity is legit: sometimes I go on a tangent, far from the mission statement of the comic.  Usually it’s something that makes pretty much just me laugh, and no one else cares.  That’s fair.  Your disdain always helps me get back on track!

I’ll try to explain as we go… 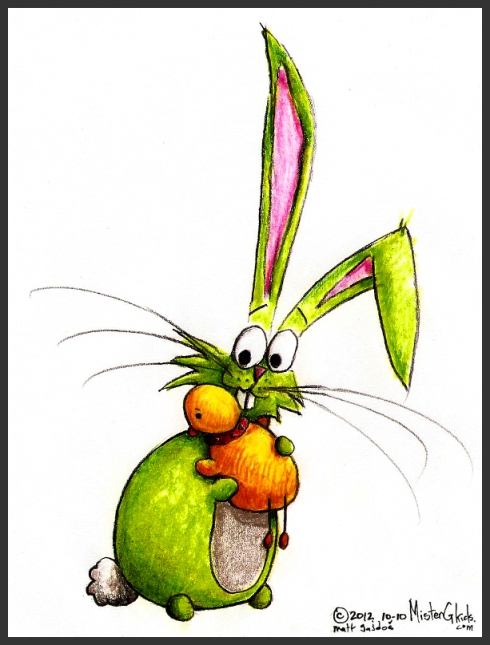 This threw some readers off.  Baby Bunny and Peep-on-a-Leash are characters from my college comic Rent Control.  So this drawing isn’t funny to anyone who doesn’t know the old comic – it’s just a picture of a green rabbit hugging a bird.

I felt that this comic should have worked.  It’s a bit of comedy from a couple of four-year-olds in the classic style of “Well, I’d like to be the Queen of England but the job is taken,” etc.  What was funny about it was that a pre-K child was clever enough to already understand sarcasm.  But I wasn’t able to convey that clearly enough in the comic.

“Yo quiero” means “I want” in Spanish, which may have further alienated readers who don’t know that language.

I spent so much energy fiddling with this.  What you see here is actually the first version of the comic.  Click through to see the published version.  I completely redrew the girl.  It didn’t make a difference.  In the early days I made some comics about observational things that little kids would say.  They weren’t funny per se, but I drew them to share my fascination with the elaborate connections that children make.  They just don’t always work as a comic.

Weekend Kids was an effort in the early days to bring more traffic to the site.  But it didn’t really work.  My peak traffic comes during the week when people are at work, busily surfing the internet!  On Saturday and Sunday, normal people are enjoying themselves without being tethered to a desk, so traffic is low no matter what.  Therefore, I never posted a “good” comic on the weekend – I saved those for Monday-Friday.  In short, Weekend Kids was a dumping ground for odds and ends and curiosities.

For example, here I wanted to do a new comic with my more than decade-old Rent Control characters.  Just like with Love above, if you don’t have any context, you don’t care.

Weekend Kids was also intended to be a place for me to re-run archival comics from my other comic projects.  I only did so a few times because, as I have already said, if it has nothing to do with the world of Mister G Kids, my core readers don’t give a damn.  Further, Rent Control was universally disliked when it ran in The Pitt News at the turn of the century.  If you’d like to read some of the vitriol written about it, I’ve posted it here.

The University of Pittsburgh had an enrollment of some 18,000 students and the paper was free to everyone.  But I intentionally wrote the comic for about 45 people in the Theatre Department who would understand the jokes.  You might call that Brechtian.  But I’ll admit it was simply antagonistic for no good reason.

Again, no one cares.  This is not even a comic.  It was a little study to figure out how the big fat rainbow guy from this comic, who had a Spanish name and army rank FOR NO REASON, would move if he tried to walk.  (The Spanish translation of his name is roughly “Grand General Really Fat of Colors.”)

Interesting to only one person in the universe: me.

Epic Friday was invented as a way to have one day a week when the comic would be truly epic – I would draw something special that took more effort.  The idea quickly died for a few reasons: 1. Friday is a low traffic day.  People are trying to leave work and drive to San Diego and they don’t care about comics, and 2. Friday is the last day of the week and is the day, as a teacher, that I am the most tired.  What was I thinking? Monday or Tuesday are usually my best comics because I am refreshed after a weekend off, and the traffic is great because people are back at work and will do anything but actually work.

After a few weeks, I was totally over the idea of Epic Friday, and in its waning days I was just lazy.  I thought I might get away with this one because it was ironically NOT epic at all, but people aren’t stupid.  I also was cheating by putting a cat in it just to get traffic for the word “cat” in the tags.

One late Saturday when I was still doing Weekend Kids, well after my personal deadline for posting comics (0:00 GMT), I was hanging out with my good friends Tim & Tess.  I told Tim I was out of ideas, and he came up with this.  I think it’s hilarious, but like so many other fails, it has nothing to with the world of Mister G Kids and I posted it at like 10 pm on a Saturday night.

Tumbleweeds blow through the town of NoOneCaresVille.

This one is kinda’ like Jack above.  Kinda’ cute, but much more unfunny to you guys than I thought.  It’s just a kindergartener inventing a word.  Probably not worth a comic, but what the hell.  Sometimes I just have to get ‘er done.

A combination of laziness and no humor at all.  I drew this in like 20 minutes and it’s obvious.  However, I still like it because it’s me as a little kid and my teddy bear walking off into the sunset.  It has a personal emotional resonance and nostalgia.

But here are the number of other people who care: zero.

Minds in the Gutter